How we make our Sudoku puzzles

We sometimes get questions around how we make our Sudoku puzzles, and what the difference is between an easy and a medium puzzle, for example.

All of our puzzles are generated by a computer program - I've lost count of how many puzzles we publish each day, but it's in the region of 100 puzzles a day. It would be very time consuming to make that many puzzles by hand for every single day!

Having said that, we want to make puzzles that actual people enjoy solving. There is a difference between hand-made puzzles and puzzles made by a computer, but I believe our approach to making puzzles makes that difference as small as possible.

It doesn't matter what kind of puzzle you are looking at making, everything starts with the solver.

In my experience, this is the evolution of a (human) Sudoku player,

The truth is that a computer can't look randomly at a Sudoku grid looking for a number to insert. The first thing the computer will do is to generate pencil marks for this whole grid. We can however do different things with those pencil marks for different difficulty levels,

Medium: In addition to the easy techniques, we will also look to see if each cell has only one candidate. We might look at a particular cell, and decide by a process of elimination that the only number we can insert is a '6', for example. This is very similar to the easy technique, but novice Sudoku players don't normally do this, in my experience. For medium puzzles we place some restrictions on how many cells in a column are already filled, and won't apply this technique if there are too many empty cells.

Hard: We apply the same techniques as for Medium puzzles, but with no restriction on how many empty cells are in a given row/column.

Tough: It is only at this difficulty we start using the advanced techniques.

Now that we have a Sudoku solver, we can start looking at a Sudoku generator. There are two steps to generate a Sudoku,

Let's look at both of these in turn,

The first part of generating a Sudoku is to generate a completed grid, and there are many valid ways to do this. We use a classic backtracking algorithm. We start with an empty grid, and fill the grid with pencil marks, so that it looks like this, 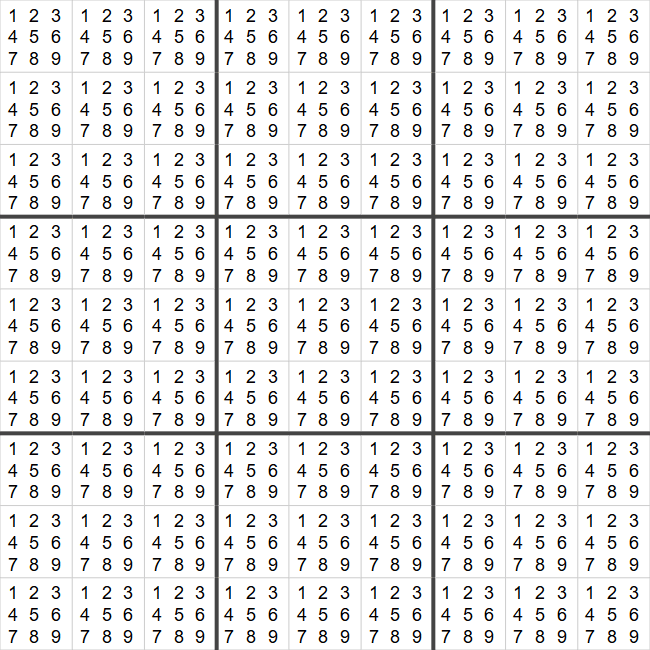 Our backtracking algorithm starts with the cell in the top-left, going through these steps, This approach will eventually give us a completed Sudoku grid, and this will be the solution to our Sudoku puzzle.

Remove values until we have a suitable starting grid

Before we start this stage, we will need to know what difficulty Sudoku we want to generate. Let's assume we want to make a Sudoku of Medium difficulty. The steps we need to go through are,

When we have finished going through all the cells in the grid, we have our starting Sudoku grid! We know that it won't be any harder than our desired difficulty, but it could be easier. As a last step, we trying solving our Sudoku at the next easiest difficulty.

In this example, we want to make a Medium difficulty puzzle. We want to make sure our solver running on the 'easy' setting isn't able to solve it. This gives us our starting Sudoku grid!

What about other variants of Sudoku?

We have over 10 Sudoku variants, but the steps we take are the same. The only thing that changes between the different variants is how we create the pencil marks for each step. Take this example of a X-Sudoku grid, 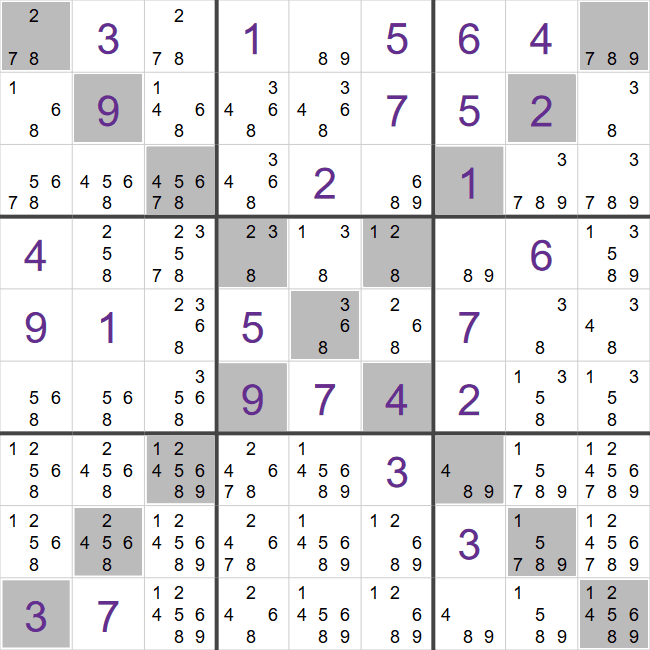 We have applied the standard set of Sudoku rules to insert the pencil marks for this grid, but we can go further and remove some of the pencil marks on the diagonals as well. Once we have done this, the next steps to solve this X-Sudoku are the same as for a standard Sudoku puzzle, i.e. we look for single candidates, etc.

We can apply this technique for any Sudoku variant. For 12x12 and 16x16 grids, we have more cells, but the overall process is the same. For Arrow Sudoku puzzles, we have a more complex set of constraints, but we take the same steps, i.e. we insert the pencil marks as if it were a standard Sudoku, and then methodically analyse each 'arrow' and only keep those combinations of pencil marks that satisfy the total for that arrow.

What is your Sudoku generator written in?

Our Sudoku solver is written in C++. There are a few reasons for this, but the main reason is that C++ was the language I was most proficient in at that time. I could claim that C/C++ will be faster than a higher level language such as Python, or javascript, or similar. My experience is, your running times will depend much more on algorithm design, than choice of programming language.

A reason I continue to use C++ is that I am confident that C++ will still be continued to be supported in the future. I created puzzlemadness in 2009, which at the time of writing was 11 years ago. I use the current version of Visual Studio to compile my puzzle generator, and I've not had to make any changes to my codebase to accommodate newer versions of compilers/libraries in that time. I can be confident that my codebase will continue to compile and run without modification in another 11 years. I'm not sure I can be confident of that in some of the other languages that are available today.

The computer I currently use has 4 CPU cores. To take advantage of this, my puzzle generator is multi-threaded, and is configured to use 3 threads, i.e. 3 CPU cores. This leaves 1 CPU core available, which is plenty for most other tasks I want to perform. This means that I can generate puzzles and do something else at the same time.