The rules to Nurikabe are actually quite simple, but they combine together to give some wonderful logic problems. The challenge is to construct a maze (where the white squares are the walls), that satisfy these rules,
From this set of rules, we can make a few deductions, 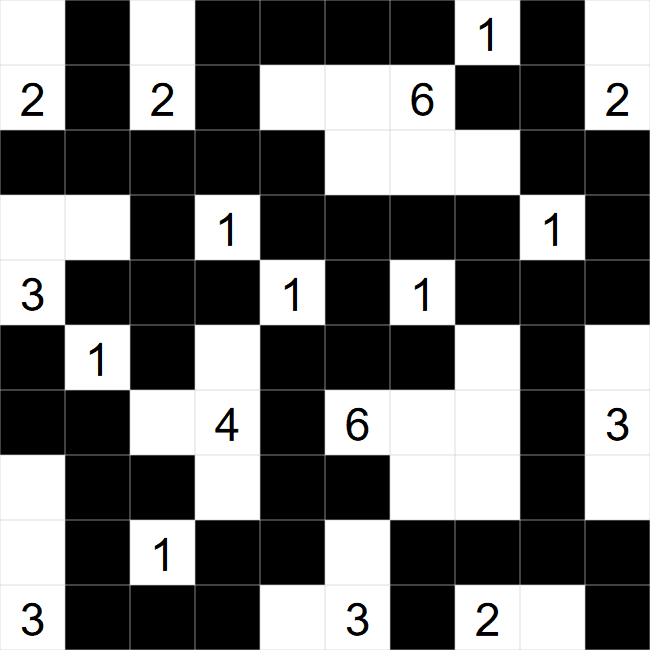 This is an example of a completed Nurikabe puzzle. You will see that the blue area is one completely connected whole. Each of the white walls contains the correct number of blocks, and that none of them are connected. 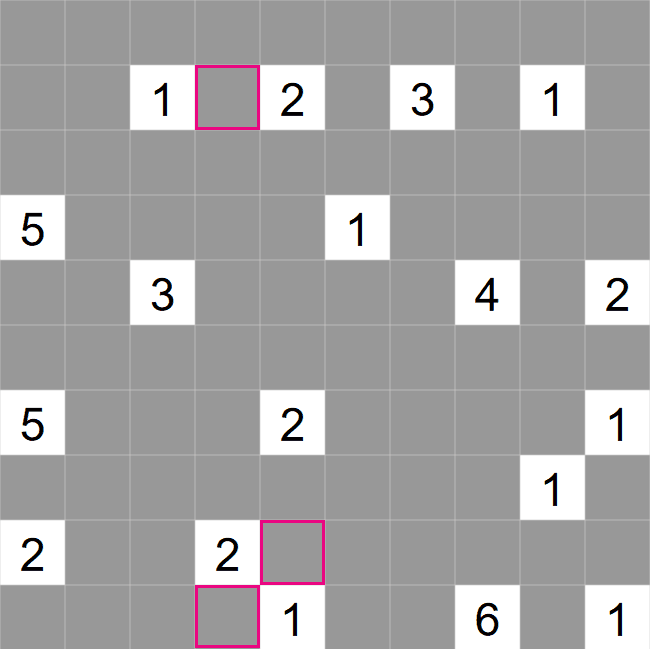 This is an example of a starting Nurikabe grid. There are three steps we will always take at the start of a Nurikabe puzzle, 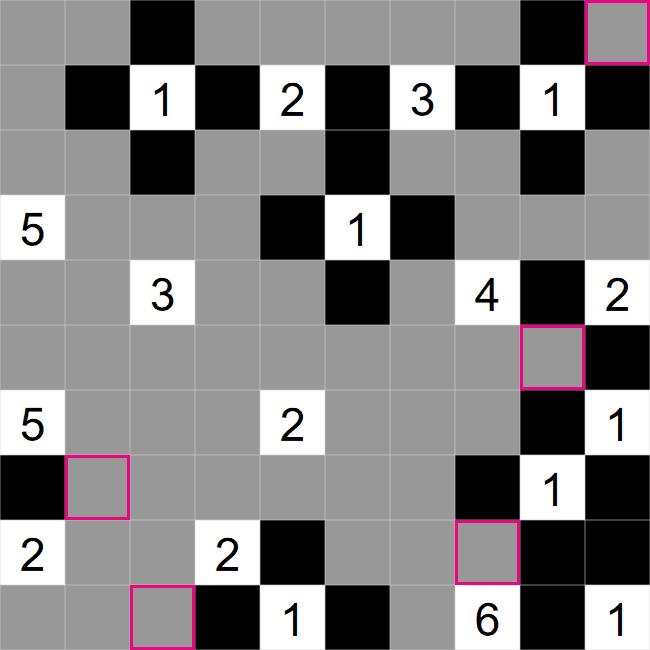 A common technique is to look for cells where white islands can't reach. The highlighted top-right cell is one such example - there isn't a white island that can reach this cell, hence this cell must be black.
We know that all of the black cells must be on single connected whole, i.e. we can't have any isolated black cells that are 'cut-off' from the other black cells. This means that the four highlighted cells must be black. If any of them were white, we would have one or more black cells cut-off from the other black cells. 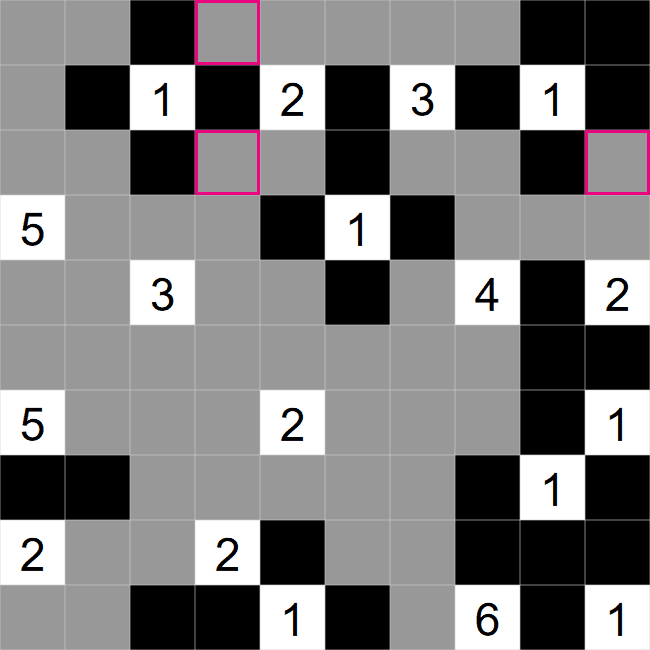 We have another three highlighted cells where there is now way for a white wall to reach those cells. We can mark these cells as being black. 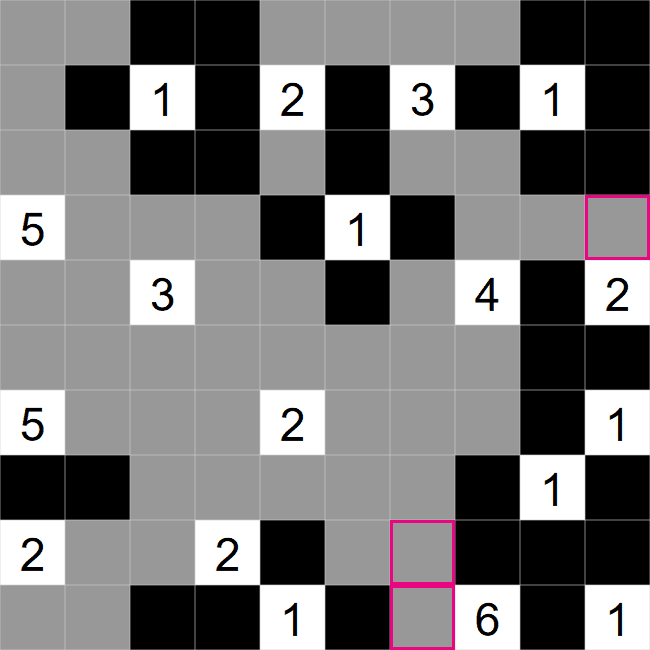 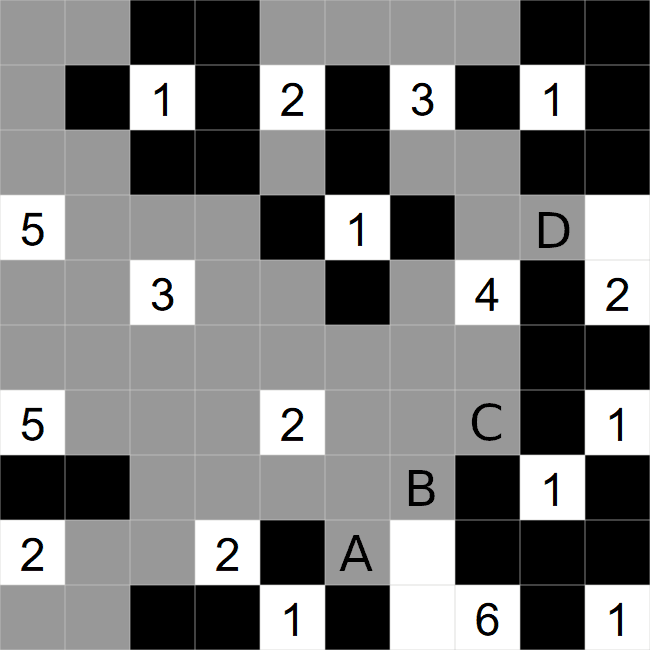 After our last move we can see that the '2' clue on the right hand side of this puzzle has all of it's wall cells. This means this block of white walls must now be surrounded by black cells, i.e. cell D must be black.
We can now chain this type of reasoning together to fill a few cells in, 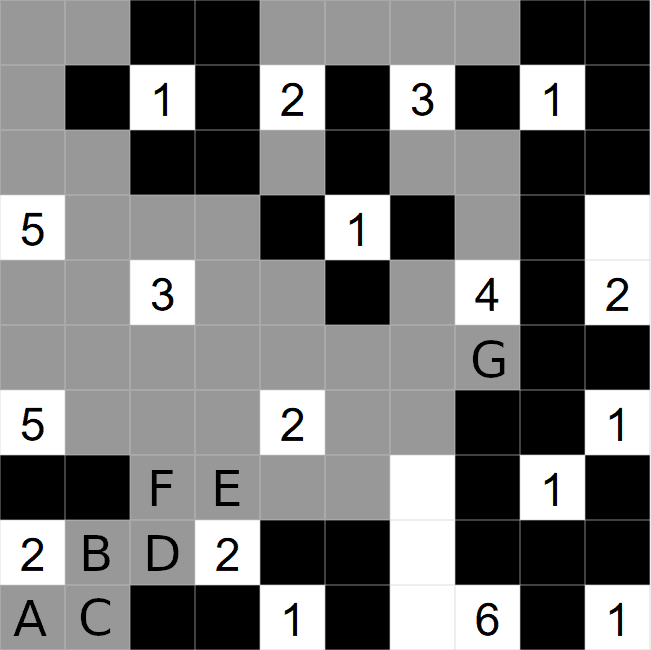 In the bottom-left of this puzzle is a wall with a '2' clue, so we know this wall will have two cells. This wall can expand in to cell 'A', or cell 'B'. Either way, this means that cell 'C' must be black, so we can fill this cell in.
Similarly with cells, 'D', 'E' and 'F'. The '2' clue must expand in to cells 'D' or 'E', which means that cell 'F' must be black.
One of the Nurikabe rules is that we can't have a 2x2 block of black cells. If cell 'G' was black, then this is exactly what we would have, therefore cell 'G' must be white. 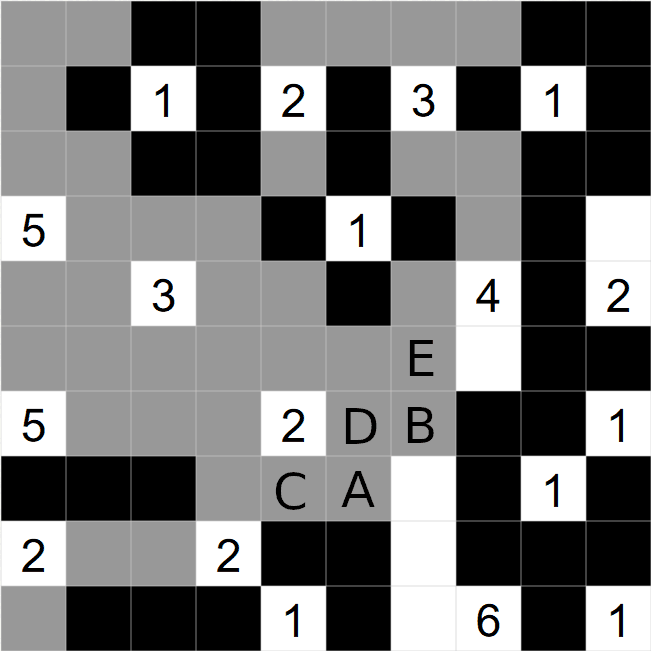 We will now look in more detail at the '6' clue at the bottom of this puzzle. We already have 4 white walls for this clue, so we need another 2. This wall can't expand in to cells 'C', 'D' or 'E' - two walls aren't allowed to touch (diagonally is ok). Expanding in to any of these cells would give us two touching white walls.
This means that our '6' clue can only expand in to cells 'A' and 'B'. We need another 2 cells, and this is our only option.
This will leave us with our required number of white wall cells for the '6' clue, so we can surround this block with black cells, i.e. cells 'C', 'D' and 'E' must be black. 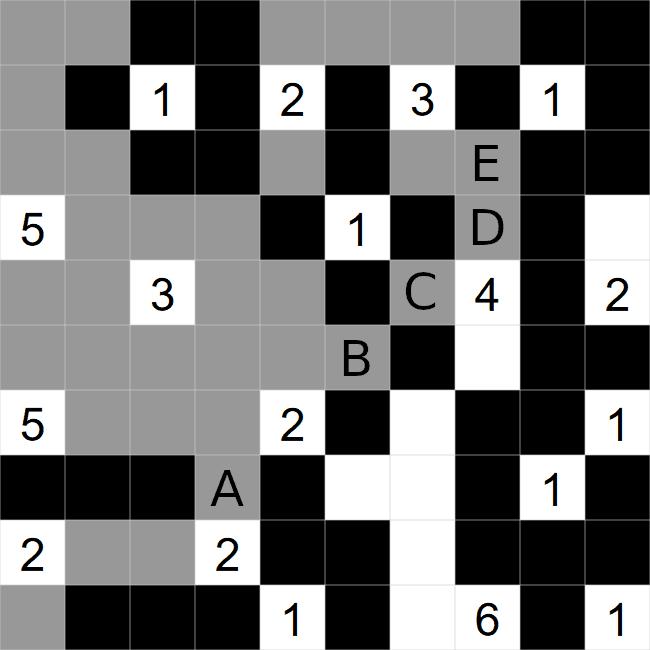 There is now a range of cells we can look at, 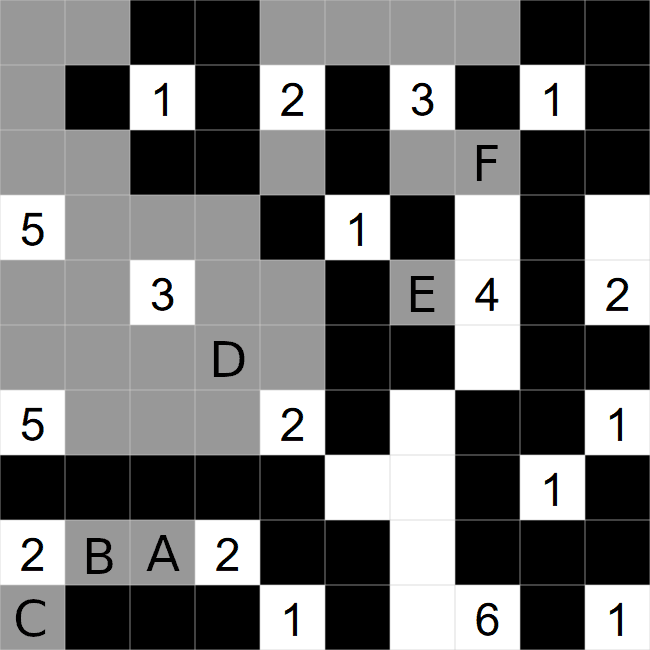 There is now another range of cells we can look at, 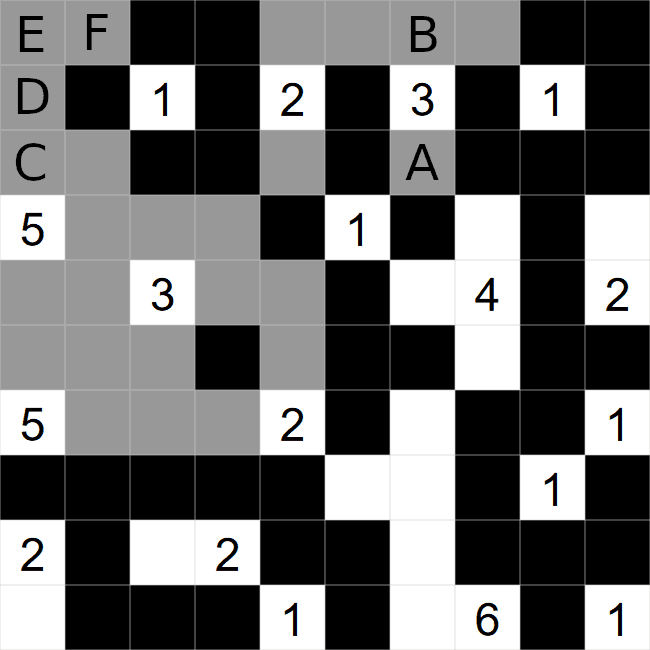 We can now look at this range of cells,
We can also look at cells 'D', 'E', and 'F' in the top-left. We know that at least one of these cells must be white to stop us having a 2x2 block of black cells. The only way this can be achieved is if the '5' clue expands upwards in to cells 'C' and 'D'. It might expand in to cells 'E' and 'F' as well, but for the time being we can only fill cells 'C' and 'D' in white. 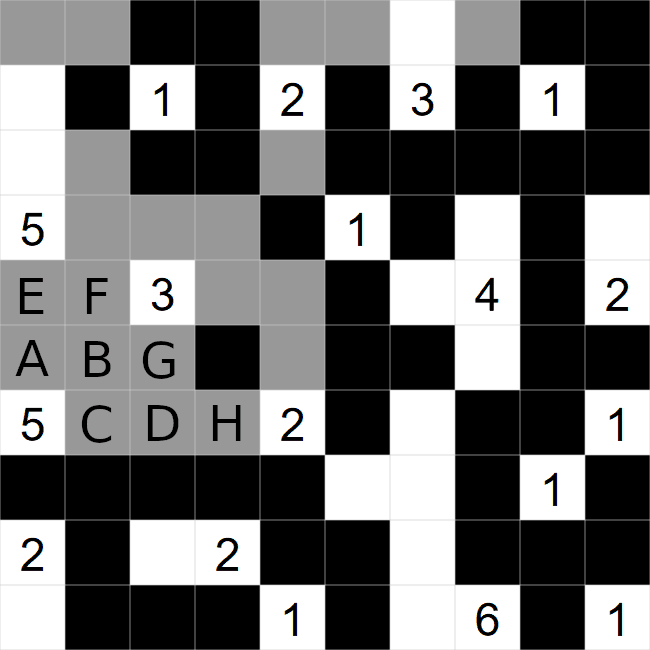 We can now look at the '5' clue in the middle-left of this puzzle. There is actually only one possibility for this clue now - it can only expand in cells 'A', 'B', 'C' and 'D'. All other possibilities would mean that this wall would merge with another wall section.
We can also fill in cells 'E', 'F', 'G' and 'H' in black to surround this white wall with black cells. 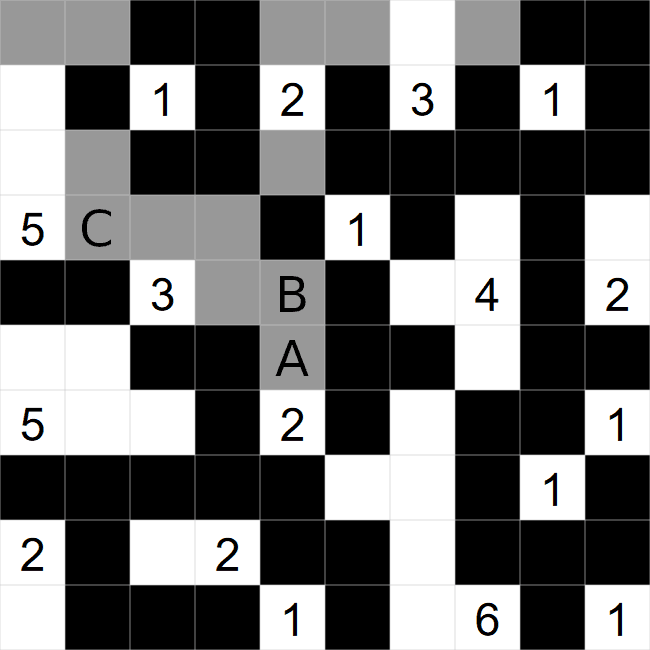 We can now look at this range of cells, 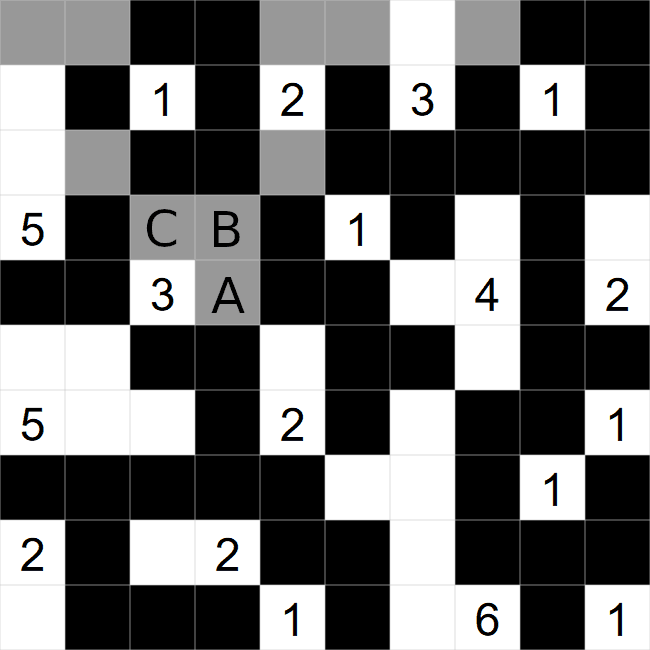 We can now look at this list of cells, 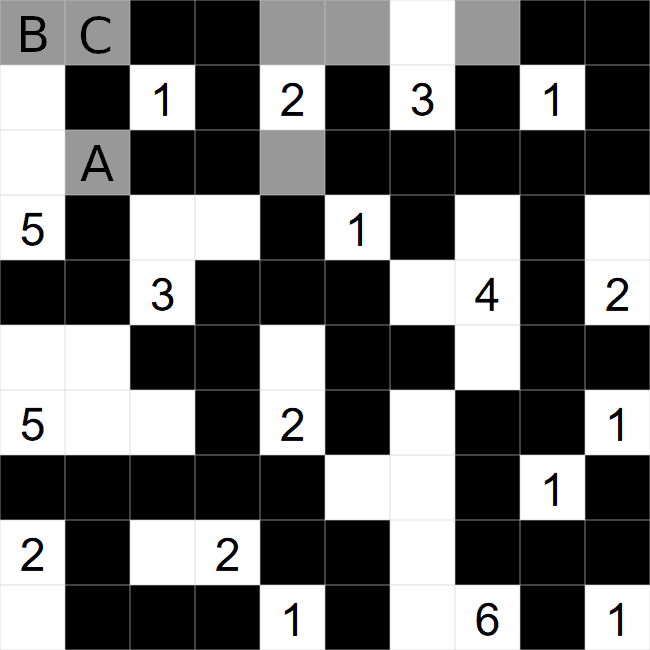 We shall now look at the labelled cells, 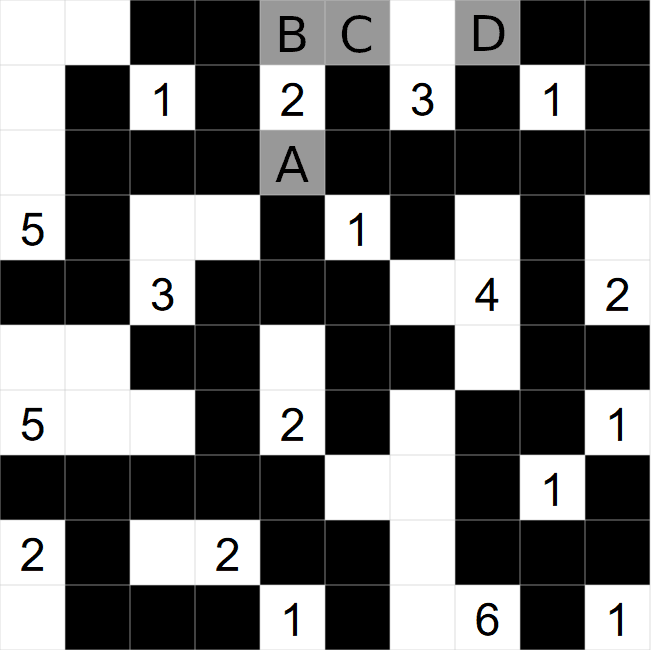 We can now finish this Nurikabe puzzle,
This page will automatically load the puzzle for today. If you want to play a different puzzle, go to the archive page and choose your puzzle.
There are two ways to play a Sudoku puzzle, you can just use the mouse/touchscreen, or you can use the mouse and keyboard. You can switch between the two methods any time you like, and can use a combination of both.

Playing with a mouse and keyboard.